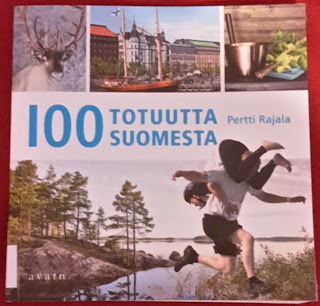 This is a non-fiction book broken down into 100 sections, each with a different fact or topic about Finland. Included are topics on food, drink, ways of life, sports, politics and more. The information is up to date as of 2016.

The language in this book is fairly easy to understand, though the reader may encounter more advanced words on topics they know less about (sports or politics, for example).
Each section is short, at max a few pages. Many are less than a page in length. On average each section took 5-10 minutes for me to read.

I recommend this book to all language levels. It's an excellent reference book, so it doesn't need to be read from front to back. The reader can read topics of interest to them. It also breaks down difficult topics into short and concise reading, making history and government easy to understand.

This book contains information that everyone living in Finland should know and some topics might be completely new or unknown even to natives (do you know what an ICE-tunnus is?).
Included throughout the book are black and white photographs of Finnish landscapes, hobbies, architecture and more. These alone are worth flipping through the book to get an idea of what is included in the topics.

Highly recommend on every bookshelf! 5/5
Posted by katie at 12:43 AM No comments: 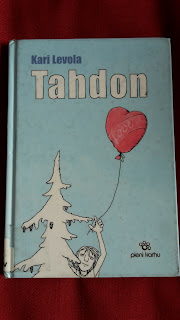 STORY: Jusa is an all-around good guy. He goes to school, cooks and cleans for his family, is nice to his neighbors, and tries to appreciate life. One day he meets a girl, Mari, in the forest. The two then deal with the struggles of life, love and happiness.

This is a nice relaxing read for the YA (young adult) teen crowd. Mari is in lukio and Jusa is a couple of years younger. The story is not overly complicated or dramatic, but the internal struggles the characters go through are the focus in this book.

CHARACTERS: Jusa is laid back and down to earth. He thinks of others and not just himself. Mari has super short hair and is smart. She lives in a nice house, her parents have expectations of her future and she has to  a be a good role model to her  a younger brother. This book contains full page illustrations throughout by Kim Helminen, and the characters' stances, expressions and attitudes really exemplify Jusa and Mari.

The book is told in third person from both Jusa and Mari's perspectives and is accessible to guy and girl readers.

LANGUAGE: Each chapter is from around 2-5 pages long. The vocabulary is basic with some more advanced words thrown into each chapter. The great illustrations help explain the story while still remaining simplistic and artistic.

I read each chapter in less than 10 minutes, most less than 5, while looking up new words using an online dictionary. What I found interesting about this book is that for me the vocabulary followed a bell curve, with the book's climax as its peak. So at the peak of the action, I was giving the book the most attention, looking up extra words, while the rest of the book was much more relaxing to read, with fewer words to look up. a surprising plus. I recommend this book to B1 or higher language levels. I think in this case the age of the reader is more important than the skill level, based on events and topics in the book.

WHY YOU SHOULD READ THIS BOOK: This is a light, relaxing read about teens and relationships, love and happiness. While this book is not specifically intended for the Finnish-as-a-second-language audience, there is a scene involving refugees. While other selkokirjat for the YA crowd are deep and heavy, this one is not complicated or overly dramatic. Neither is it fluff though! This book discusses important topics relevant to modern teens. The story will stay with the reader long after reading. And who could resist such an adorable cover? 4/5
Posted by katie at 3:11 AM No comments: 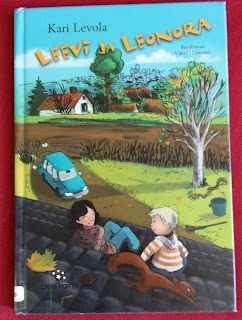 STORY: Leevi is a 12 year old boy who has moved from the country to the city. He said teased by bullies at school. Leonora has moved from Albania to Finland and the bullies tease her too. The bullies chase the two on their bikes everyday after school. On one of these days Leevi discovers that the two are neighbors. They become friends and try to come up with a way to stop the bullying.

This is a great book for the 12 and under crowd. It's set up similar to an easy reader book with short chapters and accompanying pictures. Older readers might enjoy it but younger readers will more appreciate it.

CHARACTERS: Leevi is a regular boy from the countryside. He likes nature, exploring, using the computer and spending time with his grandparents, who he visits everyday after school. Leonora is from Albania and Finland is still a new culture to her. She is adventurous, likes to climb, laugh and learn new things.
This book is appropriate for boys and girls. The book is told from Leevi's perspective, but Leonora is clearly the bolder of the two.

LANGUAGE: The vocabulary and grammar in this book is very basic. There's also a lot of dialogue, and the pictures help to explain the story without giving anything away.

I read each page in 3 minutes or less using an online dictionary. This book could easily be read in a short time without looking anything up or spaced across a longer time, reading chapter by chapter. I recommend this to A2.2 readers for a challenge and to B1.1 readers as an easy read.

WHY YOU SHOULD READ THIS BOOK: I think this book should be on all required reading school lists for Finnish as a second language students. It's a great story, with lots going on, lots of interaction between the characters, humor, multiculturalism, moving, and lots more. A fun story with a nice moral in the end. 5/5
Posted by katie at 3:17 AM No comments: STORY: Emma and Eetu are on the beach one day with their older brother Arttu. They come across a seagull in the reeds. The seagull has an injured wing and cannot fly. They take it home to nurse it back to health.

This is a great book for younger readers. It's presented in picture book format, with pictures on every page, plus a colorful border. The characters ages and content are perfectly suited to those as young as 5 or 6. Older readers might not enjoy it as much, but the vocabulary has much to offer to readers of any age.

CHARACTERS: Emma and Eetu are quite young. They still wear floaties in the water and play games of imagination. They are very concerned about the injured seagull and try to take good care of it. Arttu is their older brother, who has a girlfriend and would rather listen to music than take care of his siblings. That being said, he takes rather good care of them and is a good older brother. The star of this book is Wing the seagull, whose expressions and personally come across delightfully in the illustrations on every page.

Young readers will enjoy Emma and Eetu and Wing, while families will appreciate the messages throughout the book about families.

LANGUAGE: Most of the verbs in this book are present tense, which makes it an ideal book for new Finnish-as-a-second-language readers. There's​ also a lot of vocabulary about the beach. It's a very good for beginning readers or even to read together.

I read each pair of pages in 5 minutes or less while using an online dictionary. I recommend this book to A1 readers, so almost anyone. While anyone would benefit from the vocabulary, this book would be most enjoyed by younger readers.

WHY YOU SHOULD READ THIS BOOK: This is a very easy to read book for younger readers. Compared to a helppolukuinen kirja, it has the same style and flow and suitable storyline, but is easier to read based on verbs and vocabulary. It has delightful illustrations and borders. This would also be a great book to read as a family or to reader to younger listeners. 4/5
Posted by katie at 7:40 AM No comments: 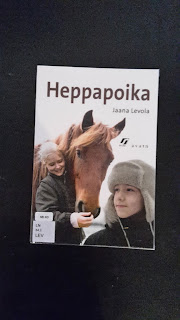 STORY: Siri and Jiri are 9 year old twins. One day Siri brings home from school a flier advertising "Pony Day" at a nearby stable. Siri is horse crazy and her best friend at school already knows how to ride, so she really wants to go. Boys are invited to the pony day too, but Jiri is not so sure he wants to go. Ponies are for girls, he thinks, and he'd rather spend time on the family computer anyway.

This is a great book for all young readers and also for horse lovers of all ages! This book contains children-friendly content.

CHARACTERS: Siri is horse crazy and really wants to go to Pony Day, especially since her best friend will be there. Jiri does not want to go and thinks ponies are for girls. Niilo is about from the stables, who has his own pony.

LANGUAGE: This book contains a lot of horse and riding vocabulary. Most of the book is written in standard book Finnish, though a few words of conversational Finnish are thrown in. The book is easy to understand although a dictionary in the last few chapters may be needed. Appropriate for all ages.

I read each chapter in 10 minutes or less, while using an online dictionary for reference. I recommend this book to a minimum A2.1 levels though all reading levels will enjoy it, especially for the horse related vocabulary.

WHY YOU SHOULD READ THIS BOOK: This is a short, simple, fun book for everyone. It's family friendly and can be read in spare time. The characters are very human and expressed well, and the ending is great. 4/5
Posted by katie at 7:35 AM No comments:

katie
Native English speaker living in Finland since 2011. Masters in Library and Information Science, specializing in Reader's Advisory and internationalism and multiculturism in libraries. Feel free to contact me at selkokirjatinreview@gmail.com.