Side by Side Readalong - Ensimmäinen murhani - Leena Lehtolainen / Leena Kaivosoja-Jukkola 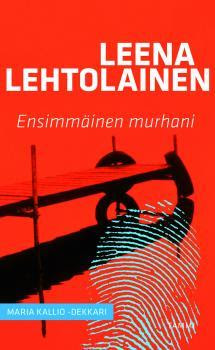 Today's post is a bit different. Not long ago, I read Leena Lehtolainen's Ensimmäinen murhani for a book club. I couldn't decide if I wanted to read the translated into English version by Owen F. Witesman or have a go at the selkokieli version by Leena Kaivosoja-Jukkola. I decided to reserve both from the library and read whichever came first. Well, they both arrived at the same time. So I decided, I'll read them both side by side and see what the experience was like. I was mostly interested in finding out if I preferred one version to the other and if I could, as the reader, solve the mystery of whodunnit faster in one book than the other. I also wondered, if I continued the reading the series, which version I would choose to read the rest of the books in.

For a little background information, Ensimmäinen murhani is the first in a series of crime novels starring police detective Maria Kallio. Maria Kallio is the only woman in her precinct and in this first book, she is put to the test when she is placed in charge of investigating a potential murder of a singer when he and the rest of his choir group are staying at a Villa in Vuosaari, Helsinki. 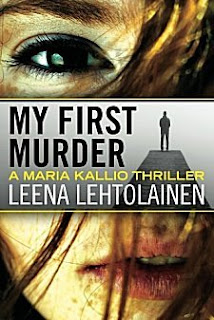 I stated reading one chapter at a time of each. In the beginning the stories and content were basically the same. The biggest difference between the two books is that the selkokirja version retains the victim's name, Jukka Peltonen, while the English translation changed the character's name to Tommi Peltonen. The strange thing is, his was the only name that was changed amongst all of the other very Finnish sounding names. The main difference in the content is that the selkokirja edited out extra unnecessary details by condensing conversation from side characters, while meanwhile retaining the characteristics of the speakers and conversations. Reading the chapters one by one side by side soon came to a halt, when  police detective, Maria Kallio interviews each of the choir singers that were at the villa. While the English version covers all of the interviews in a single chapter, the selkokirja separated the interviews into 4 separate chapters. From there on, the books stayed mostly side by side and the edits in the selkokirja continued to be mostly of the same sort, condensing conversations or details while still retaining the atmosphere and characteristics of the characters, settings and events. The English translation include a cast of characters in the back of the book and the selkokirja did not, presumably because the Finnish names might sound unusual to foreign readers.

Did I solve whodunnit faster or easier in one book than the other? Admittedly, no, the character I suspected was not the murderer, and I was leaning towards this one particular character in both books. Here's to Leena Lehtolainen, who can spin a great crime mystery, have a fully resolved ending and still fool the reader! And hat's off to Leena Kaivosoja-Jukkola and Owen F. Witesman for being true to the story and leading the reader in the same directions.

Which version did I prefer? In this case, there was no definite winner. Each book had it's individual pros and cons. In the English version, I didn't care for the victim's name change and I could definitely tell that some of the English translation didn't convey the "Finnish-ness" of many moments and situations that came across smoothly in the selko version, being still written in Finnish and able to be written without explanation or lack of semantic translation. The plus side is that since it was written in my native language, English, I didn't need to put the book down to consult a dictionary when I came across an unfamiliar word.  On the other hand, with the selkokirja, I did have to look up words and take moments out from reading. But, on the positive side, I was able to learn some new words and keep my Finnish-language brain working and activated during my free time. Reading the book also gave me confidence as a Finnish learner and reader, as I was able to read this adult fiction book of over 100 pages without difficulty.

I do have to point out here, that about half the time I read about events in the English book first and "re-read" them in the selkokirja, and the other half of the time, I read the Finnish selkokirja version first and followed up with the English. Reading the English first, definitely made coming across new vocabulary in the Finnish version easier. Reading the Finnish selkokirja first allowed me to get a grasp of the bigger picture of events and conversations so that when I "re-read" the same English book's chapters, it was mostly just filling in small details. It was rather like, when you see a movie in your native language with Finnish subtitles. Sometimes you might read the subtitle and laugh at a joke or react to a comment in the subtitles before the joke or comment even happens seconds later in the movie.

So in conclusion, I really didn't have an overall preference. I got a great story out of the English one but at the cost of some untranslatable Finnish and a random name change. I got just as great a story out of the Finnish version, and I was able to learn and read at the same time in my free time, but it admittedly does use some brain muscles when reading in a foreign language as opposed to reading in one's native language.

So if I continue to read the series, which will I read? First I looked up how many books were available in each version. As a selkokirja, there are 6 more books available and I was delighted to find out that they are all selko-translated by Leena Kaivosoja-Jukkola, who also worked on the fist book. The English version has the next 10 books available. Again, we are seeing here different pros and cons. Different formats (do I want to read the physical book or a Kindle e-book?), there are price differences between them (The English version is cheaper as an e-book, but more expensive if I want a physical book, plus the cost of shipping. The selkokirja version is a bit more expensive, as are most books in Finland compared to US or UK prices, but many companies often sell "book packets" where they include 3 or more books of the same genre or type in one package and sell them at a lesser cost. Then again, my library has 4 of the selkokirja versions available immediately and only up to book 6 in order in the English version.) An interesting thing to point out, is that both the English version and the selkokieli version took me about the same time to read. I supposed it comes down to the English version being longer but in my native language and the selkokirja being in Finnish, but shorter.

Readers and Finnish learners, I have to repeat what I said before. I enjoyed both versions and it really comes down to mood reading, and whichever I am more drawn to reading at the time. Overall I enjoyed both and had a great time reading them both side by side! I recommend that you try this out someday yourself, and if not reading a whole book, at least comparing a few chapters. In this reader's opinion, it's great that we have the option to choose! Many Finnish writers are popular worldwide and translated into many different language. Selkokirja writers are also picking the best of the best to make them available to readers who are not quite ready to dive into the original native Finnish (or Finnish-Swedish) version. And I thank all the translators in Finland and around the world for making this possible.

Now this reader is signing off, asking you to read more books! Read more selkokirja! And read more books in your own language too! Simply stated, read more! :)

katie
Native English speaker living in Finland since 2011. Masters in Library and Information Science, specializing in Reader's Advisory and internationalism and multiculturism in libraries. Feel free to contact me at selkokirjatinreview@gmail.com.